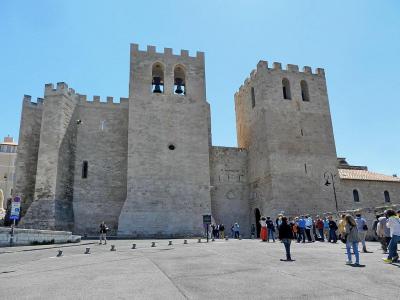 Opening Hours:
Mon-Sat: 9am-7:30pm; Sun: 9am-6pm
To visit the crypt, plan your visit from 4 to 6pm
Image by Tanya Dedyukhina on Wikimedia under Creative Commons License.
Sight description based on wikipedia

This sight is featured in a self-guided walking tour of Marseille, France within the mobile app "GPSmyCity: Walks in 1K+ Cities" which can be downloaded from iTunes App Store or Google Play. Please download the app to your mobile phone or tablet for travel directions for visiting this sight. The app turns your mobile device to a personal tour guide and it works offline, so no data plan is needed when traveling abroad.

When you take this route, you'll have the opportunity to visit spots of locals' everyday life and get a glimpse of what it is like to live in Marseille. Come early at the harbor to see fishermen departing into the sea, do some shopping at a local market, enjoy a cup of coffee in the café around the corner. You will have a lot of fun on this tour.