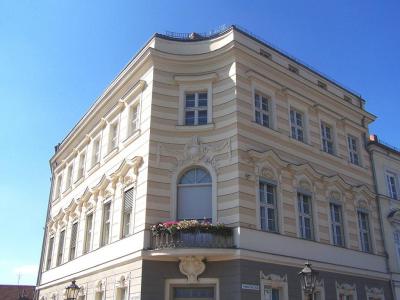 Acht Ecken (Eight Corners) is the name of a former architectural complex. At the intersection of Schwertfegerstraße and Friedrich-Ebert-Straße, four identical Baroque houses were built on the corner plots in 1771 by Bayreuth architect Carl von Gontard. Each building was designed with a concave facade towards the crossroads, resulting in eight corners in total. Today, only one of the four buildings is left. Friedrich-Ebert-Straße was turned into a wide traffic artery after the destruction of WWII, which necessitated the demolition of the two eastern buildings. The southwestern property was replaced with a modern prefab concrete building in the 1960s.
Image by Unify on Wikimedia under Creative Commons License.
Sight description based on wikipedia