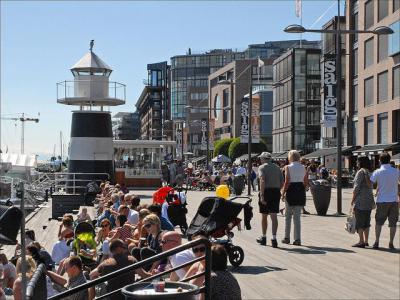 Aker Brygge is a waterfront area in the heart of Oslo’s city center. Situated on an arm of the Oslo Fjord, it houses a cinema and a number of upmarket shops and restaurants. It currently attracts 12 million visitors per year. The area gained its name from the Akers Mekaniske Verksted shipyard, which stood on this site from 1854 to 1982. Following the closure of the shipyard, local realtors Aker Eiendom bought the site and began recreating it as a shopping district. Constructed in four stages, the creation of Aker Brygge began in 1986 and finished in 1998.

In addition to shops and attractions, the area also houses apartments, offices, and a harbor and ferry terminal. 6000 people work in the area, and 900 live here. Brands like Benetton and Ecco have opened flagship stores here. A popular area that has become a gathering place for Oslo residents, it is one of many great examples of harbor regeneration. It has achieved this through an informal, interesting layout, comprising warehouses and large workshop halls, and collective building and leasing agreements that have forged a community spirit. The area is only 5 minutes away from many Oslo attractions, and has its own stop on the tram network.
Image by Grzegorz Wysocki on Wikimedia under Creative Commons License.