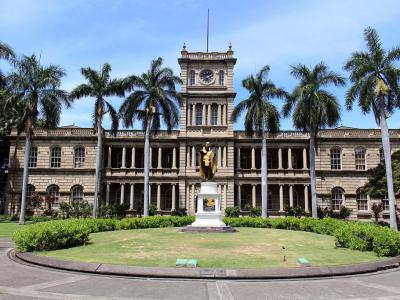 Aliiolani Hale is one of the former governmental buildings of the Kingdom of Hawaii. It sits directly across from the second Iolani Palace, in an area originally called Pohukaina.

Aliiolani Hale was designed as a follow up to the original Iolani Palace. When King Kamehameha V visited Europe, he was inspired by the palaces he viewed, and wanted to create a grand, modern government building for his kingdom. The original palace of the Hawaiian royal family, the first Iolani Palace, was a single story wooden building that was rapidly becoming inadequate for Hawaii's needs. King Kamehameha V commissioned Aliiolani Hale to serve as a palace, but soon realized that Hawaii needed a purely governmental building, too. As a result, the extravagant structure was designated as a government office building before it was completed.

In 1893, Aliiolani Hale was the site of the overthrow of Queen Liliuokalani. The Committee of Safety, led by Lorrin A. Thurston, deposed the queen. The Marine Corps was then ordered to remove her, in a military action which was declared illegal in 1993 by Congress and then-President Bill Clinton. Today, Aliiolani Hale is on the National Register of Historic Places, and houses the King Kamehameha V Judiciary History Center.
Image by J JMesserly on Wikimedia under Creative Commons License.
Sight description based on wikipedia