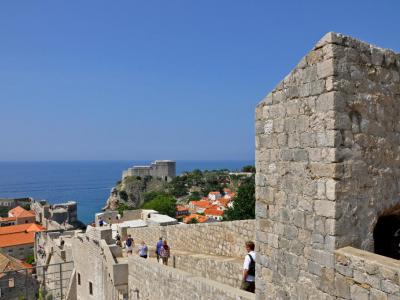 The Walls of Dubrovnik are a series of defensive stone walls that have surrounded and protected the citizens of the afterward proclaimed maritime city-state of Dubrovnik (Ragusa), situated in southern Croatia, since the city's founding prior to the 7th century as a Byzantium castrum on a rocky island named Laus (Ragusia or Lave). With numerous additions and modifications throughout their history, they have been considered to be amongst the great fortification systems of the Middle Ages, as they were never breached by a hostile army during this time period. In 1979, the old city of Dubrovnik, which includes a substantial portion of the old walls of Dubrovnik, joined the UNESCO list of World Heritage Sites.

Why You Should Visit:
Any trip to Dubrovnik is not complete without touring its walls. You can see more of the city and find spots you might not have found from the ground.
Photo ops of the buildings with spectacular orange roofs, the beautiful blue waters of the Adriatic Sea and the surrounding lush green islands are plenty.

Tip:
If entering through the Ploce Gate from the East or Pile Gate on the West, entrances to walk around the walls are available.
The walls span about 2km and feature lots of steps and rather steep inclines, so you'll want to wear your best walking shoes.
Bring plenty of water, and try to get there early in the day or in the evening; crowds are lighter, the day is cooler, and the views of the city are stunning.
Two cafes are set along the path of the wall, perfect for a mid-hike snack. The walls cost €10 to access.
Image by Glen Scarborough on Flickr under Creative Commons License.
Sight description based on wikipedia