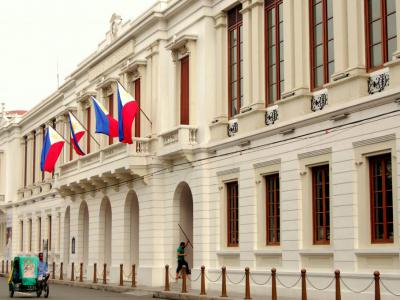 Built on Cabildo Street, the Ayuntamiento was the seat of the city council of Manila during the colonial era. Also known as Casa Consistoriales, the building was finished in 1738. However, the earthquake of 1863 caused it severe damage and repair works on the building were completed only in 1879. In 1901, the building became the headquarters of the 8th U.S. Army Corps and went on to host the first Assembly of the Philippines in 1907.

The Marble Hall or Salón de Mármol, held the first sessions of the Assembly of the Philippines on the 6th of October 1907. The structure was also home to administrative offices of the Assembly and was adorned with lavish interiors. It was also the site that came up with Philippine Legislature in 1935 and became the Supreme Court during American occupation. Unfortunately, the Second World War and the battle between the Japanese and American forces on the Philippine land completely destroyed the building and rendered it useless. What was once a grand edifice in the Intramuros district of Manila is now called the Ayuntamiento Ruins. Yet, the building remains a site to visit for every tourist of Manila and is in close proximity of other landmarks in the Intramuros district. The city administration is determined to restore the building to its former glory and has put the matter on a high priority list.
Image by antonmg on Flickr under Creative Commons License.