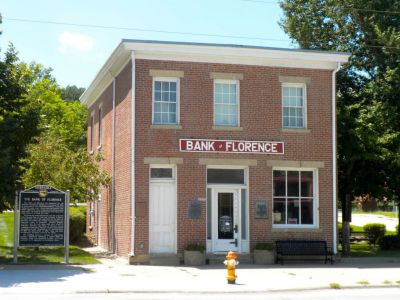 The Bank of Florence was an early wildcat bank located at 8502 North 30th Street in Florence. After originally opening in the 1850s, it closed and reopened in 1904. It is listed on the National Register of Historic Places, and is the oldest building in Omaha.

The Bank of Florence was built as a wildcat bank for speculators to make an easy profit. Many of the early investors included members of the land company that founded the nearby town of Saratoga, as well as local businessmen. When the Panic of 1857 hit, many local townspeople and farmers were financially drained. The building reopened as the Second Bank of Florence in 1904, and was restored as a landmark in the 1980s.

Today the building has been turned into the Bank of Florence Museum, which is owned and operated by the Florence Historical Foundation. Visitors can view the main bank floor, the vault, the rooms upstairs that served as the home of the original bank manager, and a restored Florence Telephone Company switchboard. The bank is open on Fridays and Sunday from May through August and on special event days. Tours on other days can be arranged by appointment.