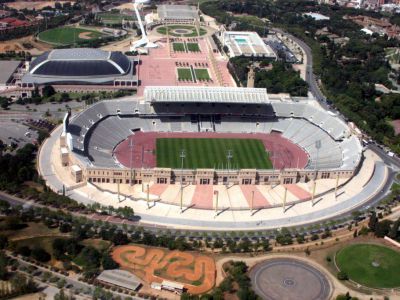 The Barcelona Olympics Stadium was originally built for the occasion of the International Exposition that was held here in 1929. The project finished in 1927. Later, the stadium played host to the Summer Olympics of 1992. The huge stadium has the capacity to accommodate nearly 56,000 spectators. It is situated at the Anella Olimpica, near the Montjuic Hill.

The stadium was meant to be the main stadium for the Summer Olympics of 1936, an honour which was handed over to Berlin instead, resulting in protests and outbreaks. In 1955, the stadium became the centerpiece for the occasion of the Mediterranean Games.

It also played host to the National Football Cup final between RCD Espanyol and Barcelona Football Club in 1957. The condition of the stadium deteriorated significantly in the seventies. Over the years, the stadium has played host to some of the most prestigious and memorable games and sporting events in history, and today it is one of the most prominent stadiums in Barcelona.
Image by Amadalvarez on Wikimedia under Creative Commons License.