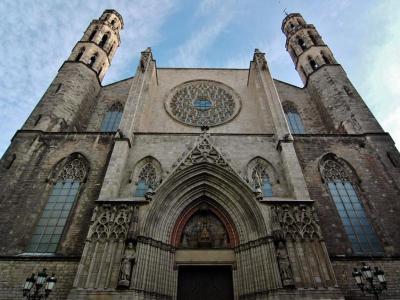 The Basilica of Santa Maria by the Sea is an imposing church, dominating Barcelona‘s Ribera district, a more authentic (and not so touristy) part of the city. The church was built between 1329 and 1383, during the heyday of Catalonia as a maritime and commercial power. It represents an outstanding example of Catalan Gothic architecture and is equally beautiful both outside (where it appears massive and severe) and inside (producing the impression of lightness and spaciousness). Inside, the basilica is a huge space literally filled with peace and tranquility, adorned with beautifully painted windows, stone carvings, statues of saints, and big organ. There are three aisles forming a single space with no transepts and architectural boundary between the nave and presbytery. The simple ribbed vault is supported on slender octagonal columns and abundant daylight streams in through the tall clerestory windows.

The most captivating thing about this church, perhaps, is just sitting here listening to the holly mass in Catalan. You don't even need to understand a word of it to feel divine. Even without touring the Basilica itself, it will be just as magnificent experience.

Why You Should Visit:
Very grand and very well preserved; offers a lift to the roof, small "art gallery", the crypt, beautiful stone carvings, choir gallery, and the most astoundingly peaceful courtyard with a large pond.
Lots of local cafes with outside tables so a lovely area to wander around.

Tip:
It is possible to take part in a guided tour up to the roof, which is actually very interesting and combined with some of the most exciting views over Barcelona.
Make sure you are properly dressed though, otherwise the guards at the entrance may turn you away.

According to legend, Barcelona was founded by mythological Greek hero Hercules on one of his expeditions, when his boats were hit by a storm. The first 8 boats managed to escape without damage, but the 9th one was lost at sea. Hercules found his lost friends some days later, along a small hill, all safe and sound. The crew was taken by the beauty of the coastal landscape, and so they decided to...  view more

La Barceloneta neighborhood was originally formed during the 18th century by fishermen and their families. Today, La Barceloneta beach is one of the most active areas of the city, both during the day and night. In addition to its beaches, the neighborhood also features a lovely marina, a popular market, and many fancy restaurants and cafes. This self-guided tour will help you discover the modern...  view more