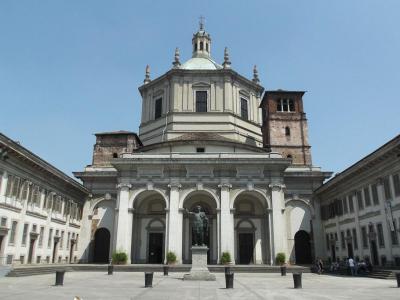 Founded in the 4th century, Basilica of Saint Lawrence is the oldest church in Milan. Dedicated to Christian martyr St. Lawrence, it was among the largest church buildings in the Europe. Its foundations were laid with the huge blocks taken from other Roman sites and its interior was done is a unique manner with the lower half decorated with marble and the upper half adorned in mosaics.

The current Basilica of San Lorenzo was rebuilt in the 11th century. In the 16th century, it was redecorated and renovated. It has a dome and four towers and its structure is similar to that of Constantinople’s Hagia Sofia. Despite all the renovations, the church has retained the original Byzantine structure.

The church consists of an open central area surrounded by an ambulatory. The plan of the building is a quatrefoil with four semicircular recesses of two storey and five arches per recess. There is a separate gallery for female worshippers now disappeared to some extent. Baroque style was incorporated while reconstructing the original dome. Front of the church is lined with sixteen ancient Roman columns with the church retaining its original octagonal floor plan.

A copy of a statue of Constantine, the first Christian Roman emperor, stands elegantly outside the church. The great dome, the highest in Milan, is a 16th century addition. A coffin in the chapel contains the remains of Galla Placidia, sister of Honorius, last emperor of Rome and wife of Ataulf. Behind the altar, a staircase leads to a room that looks like a tomb. It contains the original foundations made from the materials taken from a Roman arena.

The Basilica of S. Lorenzo underwent several fires and renovations. But the basilica maintained many of the ancient structure's elements. A huge quadrangular hall was built by using the materials from the columns of a 2nd century building. Probably built at the beginning of the 5th century, it lies opposite to the Basilica. At present, the columns are all that remains of the monumental hall front.

The chapel has an octagonal structure and is considered to be the most magnificent among the existing octagonal buildings of the Romans. The most precious treasure is represented by the bits and pieces of mosaics once used in decorating the whole place. The Basilica's style has an elementary role in western history of art and architecture, and has been reproduced many times.
Image by Blackcat on Wikimedia under Creative Commons License.
Sight description based on wikipedia