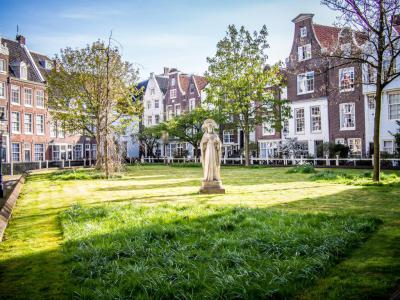 The Begijnhof is one of the oldest hofjes in Amsterdam, Netherlands. A group of historic buildings, mostly private dwellings, centre on it. As the name suggests, it was originally a Béguinage. Today it is also the site of two churches, the Catholic Houten Huys and the English Reformed Church.

The Begijnhof is the only inner court in Amsterdam which was founded during the Middle Ages, and therefore lies within the Singel — the innermost canal of Amsterdam's circular canal system. The Begijnhof is at medieval street level, which means a meter below the rest of the old city center.

The buildings in the court are tall, characteristically Amsterdam-style town-houses, emphasising the court's relatively private character. The Begijnhof is the only court whose houses have addresses bearing the name of the court itself. Unlike most courts, the houses here do not form rows joining one dwelling with another; instead, there are 47 regular town houses, each with its individual aspect, and most of them with facades from the 17th and 18th century. However, the buildings themselves are usually of earlier date, eighteen of them still possessing a Gothic wooden framework.
Image by Sergey Galyonkin on Wikimedia under Creative Commons License.
Sight description based on wikipedia