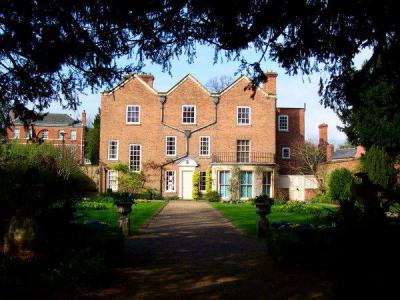 Belgrave Hall is a Queen Anne-style house built in 1709 in the midst of 2 acres (8,100 m2) of walled gardens. The hall opened to the public in 1936 as a museum. Today, Belgrave Hall shows the contrasting lifestyles of an upper middle class family and domestic servants in Victorian society. In 1999, Belgrave Hall became famous across the world when two ghostly figures were recorded on security cameras outside the hall. The site is still of interest to ghost hunters. The ISPR (International Society for Paranormal Research) examined the footage and decided the image was environmental in nature rather than paranormal. They also noted the apparition would have had to be over 10 ft (3.0 m) tall. The team from Ghost Hunters International concluded it was most likely people with reflective jackets walking around.
Image by Kate Jewell on Wikimedia under Creative Commons License.
Sight description based on wikipedia