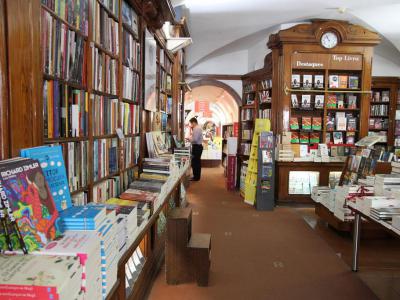 What to buy here: books by local writers.

One of the best places to buy books in Lisbon is Bertrand, located on Rua Garrett 73-75 in the district of Chiado. Bertrand is one of the oldest books shops in the world. The store was first opened in 1732, and then was reopened at a new location in 1755, after the original store was leveled in Lisbon’s massive earthquake of the same year. The bookseller has been going strong ever since. In addition to books in Portuguese, Bertrand also has a large collection of English language books. Finding just the right gift for the reader on your list should be a pinch here.

A good choice would be a book by the famous Fernando Pessoa, the quintessential Portuguese writer associated with Lisbon. He was a poet, writer and translator who live during the first part of the last century. He wrote under his own name, as well as more than 70 pen-names. Some of the most famous names he worked under, such as Alberto Caeiro, Álvaro de Campos and Ricardo Reis, had their own distinct biography and writing style. Pessoa, responsible in large part for bringing modernism to Portuguese writing, lived a fairly quite and humble life in Lisbon. An edition of his work(s) or a biography about the man himself would make a great gift for those who like to read.
Image by bm.iphone on Wikimedia under Creative Commons License.