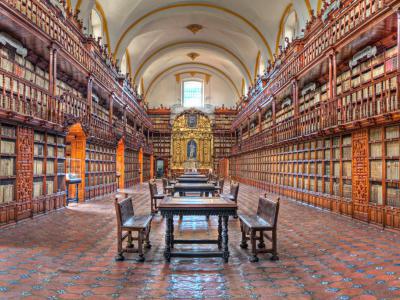 The Biblioteca Palafoxiana, founded in 1646, was the first public library in colonial Mexico, and is sometimes considered the first in the Americas. It has more than 41,000 books and manuscripts, ranging from the 15th to the 20th century.

The Biblioteca Palafoxiana owes its name and foundation to Juan de Palafox y Mendoza, bishop of Puebla. On 5 September 1646, Palafox y Mendoza donated 5,000 of his own items to the Colegio de San Juan - which was founded by him - on the condition that they be made available to the general public.

More than a century later, Francisco Fabián y Fuero ordered the construction of the premises which currently house the Biblioteca Palafoxiana. He donated his own collection, and the collections of the bishops Manuel Fernández de Santa Cruz and Francisco Pablo Vázquez and the dean of the Francisco Irigoyen Cathedral were gradually added, as were volumes from Pueblan religious schools and individuals. Books confiscated from Jesuits upon their expulsion in 1767 were also added.

The library was finished in 1773, consisting of a 43-meter-long vaulted hall on the Colegio's second floor. Two levels of bookshelves were built, and a retablo of the Madonna of Trapani by Nino Pisano was acquired. By the mid-19th century, the size of the collection necessitated a third level of bookshelves.
Image by miguelão on Flickr under Creative Commons License.
Sight description based on wikipedia