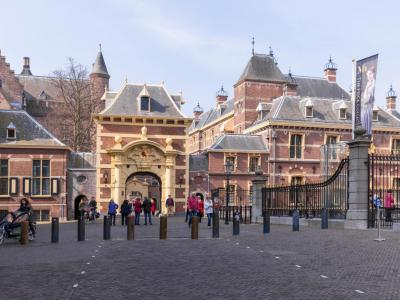 The Binnenhof (Dutch, literally "inner court"), is a complex of buildings in the Hague. It has been the location of meetings of the Staten-Generaal, the Dutch parliament, since 1446, and has been the center of Dutch politics for many centuries. This “Inner Court” is studded with monumental old buildings testifying of eight centuries of governing in the Low Countries, but it also has several ample open spaces, all freely open to the public.

A gilt neogothic fountain adorns the main square and one of the few Dutch equestrian statues (of King William II) guards the main Stadtholder's Gate, that dates from around 1600. A large modern building at the south side of the Binnenhof since 1992 houses the House of Representatives, the lower but more important of the Dutch democratically elected Houses of parliament.
Image by Roman Boed on Flickr under Creative Commons License.
Sight description based on wikipedia

This sight is featured in a self-guided walking tour of Hague, Netherlands within the mobile app "GPSmyCity: Walks in 1K+ Cities" which can be downloaded from iTunes App Store or Google Play. Please download the app to your mobile phone or tablet for travel directions for visiting this sight. The app turns your mobile device to a personal tour guide and it works offline, so no data plan is needed when traveling abroad.