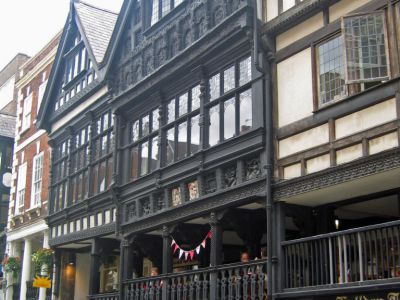 Bishop Lloyd's House is at 41 Watergate Street, and 51/53 Watergate Row in Chester. The house is built on two stone medieval undercrofts with timber framing above. Its first floor incorporates a section of the Chester Rows. The house is now used as shops and meeting rooms and it includes the headquarters of Chester Civic Trust. It was rebuilt during the 17th century when the two buildings were converted into one.

The rebuilt house broke with the medieval fashion of having the main residential accommodation in a great hall at the row level; instead the principal living accommodation was in two "elegant chambers" in the floor above the row. The house has been associated with George Lloyd, who was Bishop of Chester from 1605 to 1615. By the 19th century it had become run down, the carvings on its frontage had been covered with plaster, the house had been split into tenements, and it was becoming derelict. In the 1890s the house was heavily restored by Thomas Lockwood. He re-fronted the east house to more closely match the west house and added a flight of steps from the street to the level of the row on the east side. He also re-positioned the posts holding the structure above the row and replaced the 18th-century sash windows with mullioned windows.