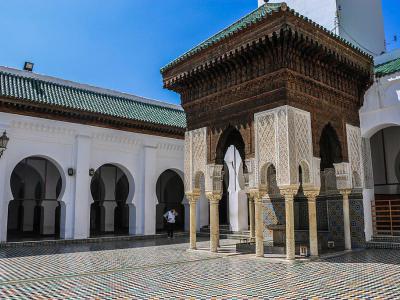 Founded in 1351–56 AD by Abu Inan Faris, who also founded the Bou Inania Madrasa in Meknes, this madrasa is widely acknowledged as an excellent example of Marinid architecture.

The name "Bou Inania" comes from the first part of the sultan's name "Abou Inan". The madrasa functioned both as an educational institute and as a congregational mosque. This is the only madrasa in Fes with a minaret. Opposite the main doorway of the madrasa is the entrance to the dar al-wudu (ablutions house). Left and right of the central court there are classrooms.

According to history, religious leaders of the Karaouine Mosque advised Abu Inan Faris to build this madrasa. It was the last madrasa to be built by the Marinids. The madrasa became one of the most important religious institutions of Fes and Morocco and gained the status of Grand Mosque.

The madrasa was renovated in the 18th century. During the reign of Sultan Mulay Sliman, entire sections were reconstructed. In the 20th century, major restoration work was performed on the load-bearing structure, the plaster, wood and tiled decorations with Islamic geometric patterns.

The madrasa is one of the few religious places in Morocco that is accessible for non-Islamic visitors. Opposite the Madrasa Bou Inania is the Dar al-Magana, a wall with a hydraulic clock that was built in conjunction with the madrasa.

Why You Should Visit:
To see the result of the period when Moorish architecture, art, math, medicine, philosophy, etc., were the highest quality in the world (in about the 14th century).
While the tour itself doesn't take long to walk through, the courtyard is very beautiful with intricate wood carvings and colourful tile work that should definitely not be missed.