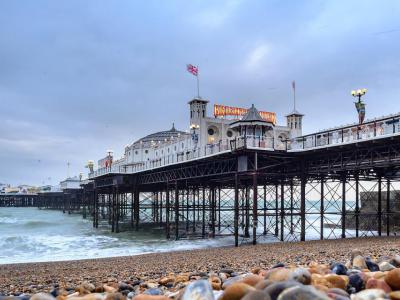 The West Pier was its rival but was closed in 1975 and was subsequently severely damaged by fires and storms, with the remaining iron structure being partially demolished in 2010. Work began on the Palace Pier in 1891 and it opened in May 1899 after costing a record £27,000 to build. This was Brighton's third pier. A concert hall opened two years later, and by 1911 this had become a theater. The pier features prominently in the 1971 film, Carry On at Your Convenience, and it is frequently shown iconically to "set" film and television features in Brighton, for example in scenes in Mirrormask, The Persuaders, the Doctor Who serial The Leisure Hive (1980), the 1979 film Quadrophenia.
Image by Colin Gregory Palmer on Wikimedia under Creative Commons License.
Sight description based on wikipedia