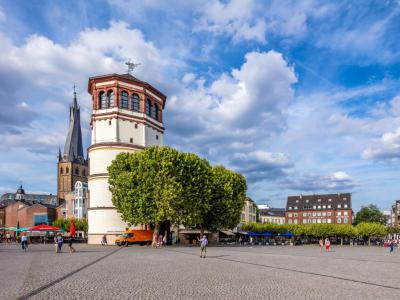 Burgplatz is a centaral square located directly on the bank of the Rhine in the Altstadt part of the city. The history of the square is almost as old as that of the city itself. The point of origin of the city of Düsseldorf is located only a few meters away to the north. After the fishing village was raised to the status of town in 1288, followed an urban expansion to the south. In relation to this on the bank of the river was built a castle which was to support the collection of taxes. From this castle (Burg) the square took its name. During the passing of time after many fires and destruction the ruins of the castle were removed in 1892 and only a castle tower remained.

The area around the castle tower was awarded as Germany's most beautiful square. Here you can enjoy some dark beer whilst watching the river Rhine run by. Also it is possible to stroll along the river up to the fair trade or historical area Kaiserwerth. Biking and in line skating is also possible.
Image by CurrenciesNow on Wikimedia under Creative Commons License.
Sight description based on wikipedia