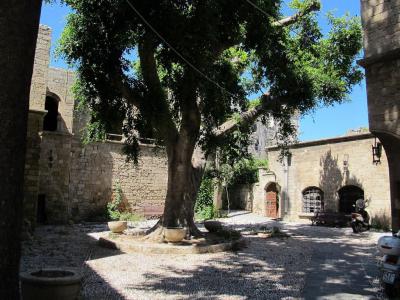 In addition to the opulent textiles that you find adorning the walls of the museum, there are fascinating ceramics, documents, coins, sculptures, crosses and jewelry inlaid with precious gems on display. The museum is open between 9am and 5pm Tuesday to Sunday. Exploring the Byzantine Museum is an excellent way to learn more about this fascinating era and its artworks not only on Rhodes, but within the region in general.
Image by Radu Barla on Wikimedia under Creative Commons License.

This sight is featured in a self-guided walking tour of Rhodes, Greece within the mobile app "GPSmyCity: Walks in 1K+ Cities" which can be downloaded from iTunes App Store or Google Play. Please download the app to your mobile phone or tablet for travel directions for visiting this sight. The app turns your mobile device to a personal tour guide and it works offline, so no data plan is needed when traveling abroad.

Museums and Galleries Tour of Rhodes