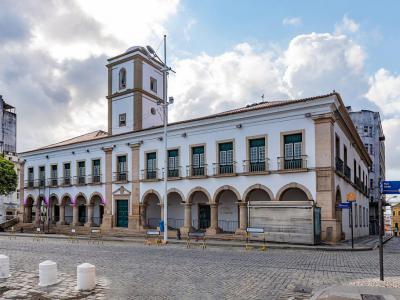 Camara Municipal de Salvador - The Salvador City Hall - was built in 1549, shortly after the foundation of the city, and initially incorporated legislative, judicial and executive powers under one roof, including a public prison which occupied the ground floor and the basement. The prison was divided into northern and southern wings – for women and men, respectively – and remained here until the first half of the 19th century when it was transferred to Fort Barbalho. Eventually, the judiciary also moved out. In the 1970s the building underwent renovation set to recover its original style, reflecting Portuguese mannerism of the 17th century. In 1997 the Salvador City Hall Memorial was established. However, it opened to the public only in 2001. The memorial houses a collection of artifacts pertaining to the history of Salvador, including paintings, photographs and more.
Image by Ssasantos, modified by Fulviusbsas on Wikimedia under Creative Commons License.

This sight is featured in a self-guided walking tour of Salvador, Brazil within the mobile app "GPSmyCity: Walks in 1K+ Cities" which can be downloaded from iTunes App Store or Google Play. Please download the app to your mobile phone or tablet for travel directions for visiting this sight. The app turns your mobile device to a personal tour guide and it works offline, so no data plan is needed when traveling abroad.

Create Your Own Walk in Salvador

Creating your own self-guided walk in Salvador is easy and fun. Choose the city attractions that you want to see and a walk route map will be created just for you. You can even set your hotel as the start point of the walk.

The modern part of the city is the best place to experience Salvador’s everyday life. You will find many locals walking in its parks, a Protestant church, as there are many Baptists in the city, and a beach that gets particularly crowded with locals, especially on weekends. Take the following tour to learn more about the everyday lives of Salvador’s citizens.

Salvador is divided into the historic Upper City, and the Lower City located on the waterfront. The Lower City has a great view of the Bay of All Saints and magnificent buildings, monuments and fountains. Take the following tour to see the best spots in this area of Salvador.

Salvador has a very rich artistic, religious and cultural heritage that is represented in its diverse museums. Museu de Arte da Bahia, the city’s oldest museum, is a must-see, and its religious museums are famous for their priceless sacred pieces. The following tour offers a unique journey to Salvador’s most popular museums.

Salvador’s historic district contains many old Catholic churches with wonderful architecture and history. It has so many that some joke that one can visit a different church in Salvador each day of the year. Take the following tour to discover the city’s best churches.

South Salvador contains several great attractions worth seeing, with many architectural sites along the historic Avenida de Sete Septembrio. Several squares, monuments and sculptures can also be found in this part of the city. Take the following tour to discover the great attractions on Salvador’s south side.