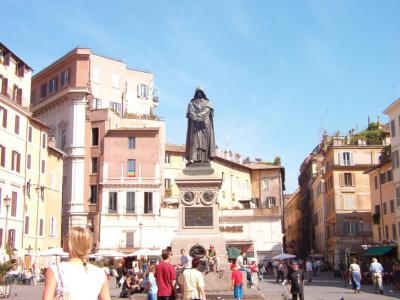 Campo de' Fiori or the "field of flowers" is the name originated in the Middle Ages when this part of today's Rome was nothing but a meadow. At the end of the 15th century, the meadow was paved and, over time, became a square for public executions. Here, in the year 1600, one of the most brutal executions in the history of mankind took place seeing philosopher Giordano Bruno burnt at a stake for heresy. A harsh critic of bigotry and opponent to some religious theories like that of Trinity and geocentric model, he believed that the universe could be infinite and filled with innumerable worlds. These thoughts were far beyond the tolerance of the then Catholic Church which ultimately cost Giordano Bruno his life and saw all of his works forbidden by the Holy Office.

In 1889, a statue of Giordano Bruno was erected in the middle of Campo de’ Fiori, on the very spot he met his final hour. The statue stands defiantly facing Vatican, portraying Bruno as a martyr for the freedom of thought. The inscription at the base of the statue reads: "To Bruno - From the Age He Predicted - Here Where the Fire Burned".

Around the same time in the late 19th century, the square started hosting a daily vegetable and fish market. This market opens early and works until around 1-2pm offering fresh produce, cheeses, seasoning and pasta, and you can taste pretty much everything before buying. By night, Campo de' Fiori turns into a popular meeting place; a hive of outdoor cafes, restaurants and entertainment suiting various tastes and pockets.