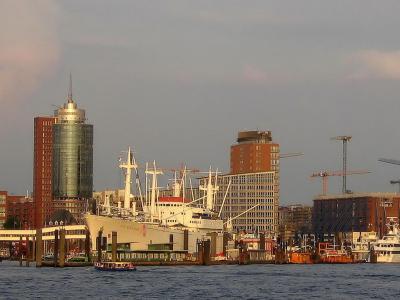 The Cap San Diego museum ship is moored on the north bank of the River Elbe, close to the Landungsbrücken, and just yards from another 'museumsschiff’, the Rickmer Rickmers. The Cap San Diego is an elegant former cargo ship, painted in the red and white colours of local shipping firm Hamburg Süd. Built in 1961, it sailed between Germany and South America for twenty years, the last of six ships collectively nicknamed the ‘white swans of the Atlantic’. Set for the scrap yard in 1986, it was bought by the city of Hamburg as part of the ongoing regeneration of the city’s docklands.

Restored by local enthusiasts and former dock workers, the Cap San Diego is now a fully operational museum ship. Visitors can access almost all areas of the ship, from the bridge to the engine room. Temporary exhibitions are held in the cargo hold. The most impressive feature of this particular museum ship is that is still sails several times a year, along the river Elbe or to nearby Cuxhaven. The Cap San Diego is open from 10am until 6pm daily, and offers late opening as part of Hamburg’s ‘Long Night of Museums’ scheme. Fully restored cabins can also be booked for overnight stays – whether the ship leaves port or not.
Image by Wmeinhart on Wikimedia under Creative Commons License.