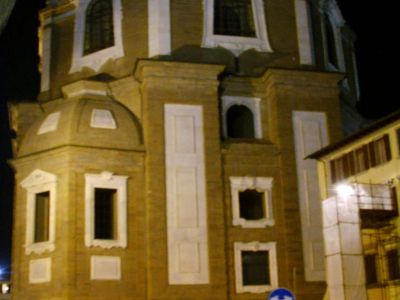 The octagonal Cappella dei Principi surmounted by a tall dome, 59 m. high, that is the distinguishing feature of San Lorenzo when seen from a distance, stands centrally sited with respect to the nave, to which it provides the equivalent of an apsidal chapel. Its entrance is from the exterior, in Piazza Madonna degli Aldobrandini, and through the low vaulted crypt planned by Bernardo Buontalenti before plans for the chapel above were made. It was designed by Matteo Nigetti, following some sketches tendered to an informal competition of 1602 by Don Giovanni de' Medici, the natural son of Cosimo I, Grand Duke of Tuscany, which were altered in the execution by the aged Buontalenti; thus, a true expression of court art, it was the result of collaboration among designers and patrons.
Image by sailko on Wikimedia under Creative Commons License.
Sight description based on wikipedia