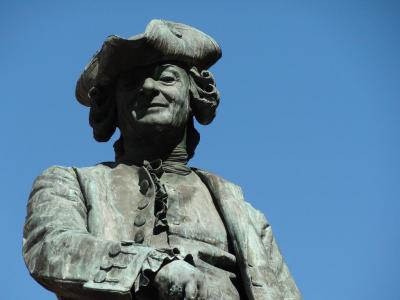 Carlo Goldoni – one of the most famous playwrights of Italy who has transformed the more conventional “commedia dell’arte” from a vehicle for semi-improvised clowning into a medium for sharp political observation – was born in Venice in 1707 in the Gothic palace, called Ca' Centanni.

Goldoni's importance lay in providing good examples rather than precepts. He modeled his plays on those of Molière, although his plays are gentler and more optimistic in tone than the Molière ones. Goldoni's plays are still the staple of theatrical life in Venice, and ensure no risk of running out of material – allegedly, Goldoni once bet a friend that he could produce one play a week for the whole year, and won it.

A monument to Carlo Goldoni, made by sculptor Antonio Dal Zòtto in 1883, stands in San Bartolomeo Square, a stone's throw away from the Rialto Bridge, and is similar to the monuments found in Florence and Paris, where Goldoni eventually exiled himself. After his move to France, Goldoni's plays took on a clear anti-clerical tone and often satirized the hypocrisy of clergy and Church in general.

In his memoirs, Goldoni painted himself as a born comedian, careless, light-hearted and with a happy temperament, proof against all strokes of fate, yet thoroughly respectable and honorable.
Image by Iain Cameron on Flickr under Creative Commons License.