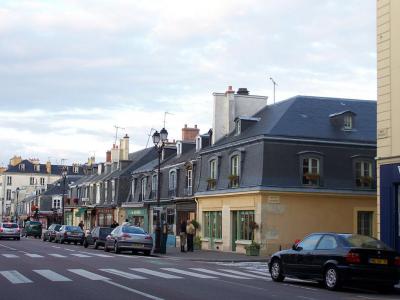 One of the most charming areas of Versailles is the Carré Saint Louis and you shouldn’t miss visiting this historical district.

In 1737 King Louis 15th gave permission for a group of buildings to be put up around the crossroads of the Rue d’Anjou and the Rue Royale. These buildings were intended to be used for a covered market.

They were laid out in squares on the four sides of the crossroads and named Carré à l’Avoine, Carré à la Fontaine, Carré au Puits and Carré à la Terre.

Unfortunately, the market never got off the ground and the two businessmen who had persuaded the king to grant them permission to build them, had living quarters added above the stalls which became shops in 1755.

The Carrés are quaint and look rather top-heavy as the first floors are built of grey brick and have tall, narrow windows. The sloping roofs are of slate and they have dormer windows set into them, increasing the living space in the attics.

Under the rule of Napoleon Bonaparte, the Carrés were condemned to demolition, but the need for lodgings was great, and instead he had them renovated. Today there are still shops, bars and galleries on the ground floors, while the accommodation above them is among the most exclusive – and the most expensive - in the area.
Image by ℍenry Salomé on Wikimedia under Creative Commons License.