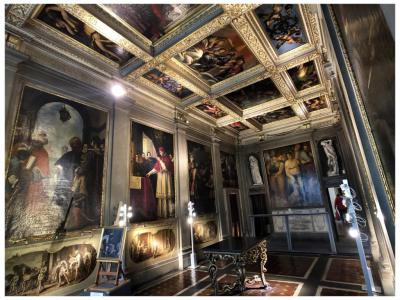 A short distance from Piazza Santa Croce but away from its crowds, Casa Buonarroti is a haven of peace. Once the property of Michelangelo, the building was inherited by his nephew, Lionardo, after his death; however, it was Michelangelo Buonarroti the Younger, the artist's great-nephew, who converted it into a place of memory and celebration of the Renaissance genius.

No photos are allowed, but visitors can spend as much time as they want in very close proximity to two of Michelangelo's earliest sculptures, as well as to his wooden model for the planned marble façade of San Lorenzo – intended as a "mirror for architecture and sculpture for all Italy", but which has eventually been taken away from him, stirring bitter complaints.

Also of interest is a collection of more than two hundred of the master's restored drawings, letters and sketches, as well as the several personal possessions (shoes, canes, a sword, chairs), and a portrait of himself he is said to have owned. Subsequent generations added to the collections, which now also include numerous paintings depicting important events in Michelangelo's life.

***MICHELANGELO'S MASTERPIECES***
Housed here are the two main pieces of Michelangelo's earlier works – "Madonna of the Stairs" and the "Battle of the Centaurs", the first of which he is thought to have carved when he was 15 and the latter around the age of 17. While "Madonna of the Stairs" is an obvious homage to Donatello's reliefs, the "Battle of the Centaurs" marked a significant departure from the techniques established by earlier masters, the many dynamically-carved human figures leading Michelangelo to his "own personal revolution". Having regarded this latter sculpture as the best of his early works, he kept it for the rest of his life, though he destroyed or abandoned many of his other pieces.

Tip:
While here, you can buy a combo ticket including admission to the Santa Croce complex.