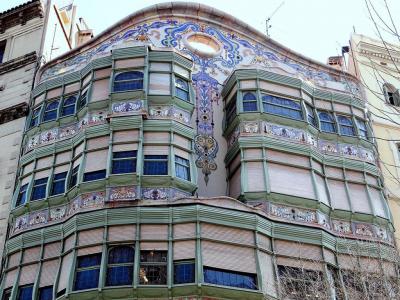 There is a great misconception even among the locals in Barcelona, that the Casa Comalat was designed by the great Antoni Gaudí, but even though that’s not the case, it is clearly influenced by his genius. A typically Modernist structure with no sharp lines and generously decorated, this “casa” forces everyone to stop and is counted among the best projects that local architect Salvador Valeri has worked on.

Dating to 1911, it was commissioned by señor Comalat, a renowned moneylender at the time, who wanted his home to be a reflection of his power, just like much of the rest of the bourgeoisie. Curiously enough, the building actually has two different facades: formal at the front, more playful at the back. The former has a dozen curvy stone balconies with wrought-iron railing, while the latter features spectacular polychrome ceramics and a number of wooden galleries that add an interesting touch. To be more specific, it almost looks as if a pink and turquoise cake had dropped out of the sky and squashed another building beneath it, its gooey icing oozing off the sides and onto the sidewalk!

Though not open to the public and hidden away from any major road, Casa Comalat is an essential visit for lovers of Modernism; delicious, dreamy, and very photogenic.
Image by Stefanrevollo on Wikimedia under Creative Commons License.