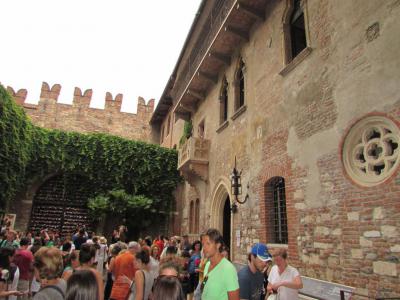 Casa di Giulietta, or the house of Juliette, is a 13th-century structure situated on the remains of a Roman insula building on the Via Capello. It is located near well-known Juliette’s Tomb.

Although many dispute whether or not Romeo and Juliette actually existed, the house remains a popular sightseer location that thousands of tourists visit each year. In fact, the house was formerly owned by the dell Capello family. Many guests write notes on the wall and the doors of the courtyard. From the balcony, one can even imagine ill-fated lovers talking to each other.

The dwelling contains a museum that displays frescoes, paintings, and artwork from the 16th and 17th century. One treat not to be missed is the bronze statue of Juliette. It is said that good luck will come to those who rub the right breast of the sculpture. Entrance into the courtyard is free, but entry into the house is not. If you want to avoid crowds, the best time to visit is in the morning or afternoon.

Tip:
While the house tour is pretty basic, you can upgrade your ticket to include the tomb as the grounds are lovely and have some nice frescoes.
Also, the whole area AROUND Giulietta's balcony – with its small medieval streets, restaurants, cafeterias, "aperitif" places – is enchanting.