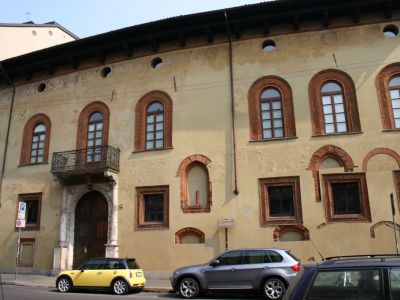 Casa Fontana-Silvestri, one of the few Renaissance buildings present in Milan, is a classic house of the 15th Century. Though the main structure dates back to the 12th century, its present form is due to a systematic amendment made at the end of the 14th century, in a style that combines Renaissance and Gothic elements.

The frontage of this Milanese building is quite unadorned but it does have an interesting wall painting below the roof space. The roof over the arch-shaped windows is protruding. Being one of the oldest homes in the city and declared by some scholars to be the effort of Bramante, it features elements by both Bramante and Bramantino. Inside, there is a stylish courtyard with a porch. The facade has ornamental cotto (baked clay) window frames and there are scowling masks above the stone door. Bramante is thought to have designed the cotto decorations present on the facade. The facade was originally decorated with paintings done in water color on wet plasters, known as frescos. Most of these painting have, however, disappeared and just a few remnants are now visible under the ornamental molding around the wall (cornice).

Many stately buildings covering the architecture styles from Renaissance to Art Nouveau, run all along the Corso Venezia, one of Milan's most prominent streets. Casa Fontana-Silvestri is one of the most beautiful houses on Corso Venezia and is worth spending your time.
Image by G.dallorto on Wikimedia under Creative Commons License.