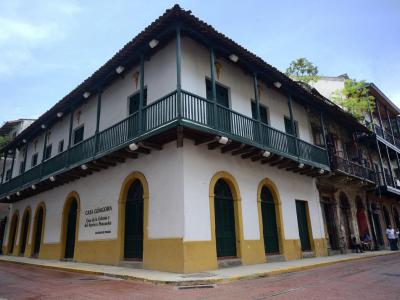 Casa Góngora is one of the oldest and the only genuine colonial house in Panama City. Built in 1756 by Capt. Paul Gongora, a Spanish merchant who dealt in pearls, this is the last surviving piece of the 17th century colonial architecture in the city. The house was bequeathed to the church after Gongora's death and changed hands several times before was finally handed over to the Panama Municipality in 1995.

UNESCO declared Casa Góngora along with the entire Old Town as the World Heritage site in 1997. During restoration of 1998-99, much of the original woodwork, such as the doors, balconies and the armor, were left intact. Now the municipal property, Casa Góngora serves as a cultural center and hosts regular exhibitions by local artists. You can pop in casually to see some local creations or just admire the restored architecture and woodwork. You can also attend free jazz concerts on Wednesday nights at 8 o'clock and, if lucky, get a chance to catch Friday night bolero concert as well.

A legacy of the colonial rule, Casa Góngora is known to be of a great historic importance for having retained its original architectural style until today. Touring this extraordinary place will give you an incredible opportunity to see with your own eyes what life was like in the colonial times. The site is open on all days and the entry is free.
Image by spavalice/ Pre on Flickr under Creative Commons License.