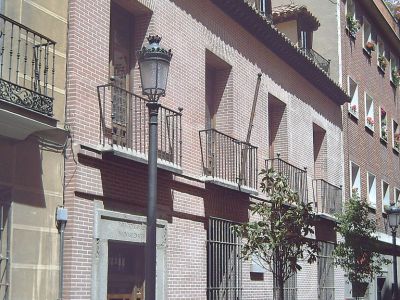 House museums are always an interesting way of learning about the life of the occupant and the Casa Museo Lope de Vega is no exception.

You will find the museum in a charming three stored 17th century building in the street named after one of his fellow playwrights – Cervantes. Lope de Vega spent the last 25 years of his life in this house where he wrote several rather religious-minded plays and poems.

The furniture and ornaments, while typical of late 16th and early 17th century Spain, are nonetheless reproductions of Lope de Vega’s actual furniture and personal belongings – the originals were divided among his children after his death in 1635. This doesn’t take anything away from the charm of this small museum, which depicts life in the Golden Age of Baroque Literature. The gardens are lovely, with a well and fruit trees that Lope de Vegas mentions in his diaries.

Lope de Vega is little known outside Spain, where he is considered one of the greatest writers of Western literature. During his life he wrote over 1800 plays, 9 epic poems, 7 novels and novellas and over 3000 sonnets. He had a very complicated love life: he was married twice, but had several children by various mistresses. Even when he joined the priesthood in 1614 he kept up his romantic trysts!
Image by Luis García on Wikimedia under Creative Commons License.
Sight description based on wikipedia