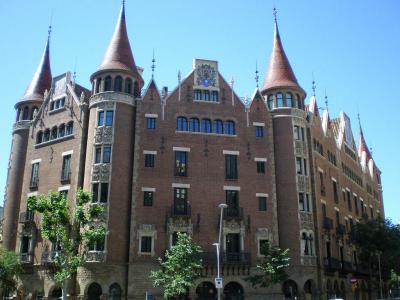 Known locally as Casa de les Punxes (the “House of Spikes”) because of its sharply pointed turrets, this apartment block looks like a fairy-tale castle and is the largest work of architect Josep Puig i Cadafalch. Rather controversial in the past due to its almost Northern European appearance, the house is now regarded as one of the greatest landmarks of Catalan Modernism.

As it happens, this grand eccentricity, breaking away from the dominant tradition, is also the only fully detached building in the whole district of Eixample. With six towers and three separate entrances, it was built in 1903 for each of the Terrada family’s daughters – Àngela, Josefa and Rosa, each of whom owned a house around the entire corner of a block. Hence, the architect created a unique project, seamlessly blending three separate buildings into the imposing triangular complex seen today.

Sadly, successive occupants stripped the interior of almost all the original furnishings and adornments. The ground floor now holds a gift shop and a cafe-bar. The self-guided tours of the apartments above start with a multi-media retelling of the legend of St George and the dragon, owing to the fact that the architect crowned one of the facades with the image of Catalonia’s patron saint.

Inside the building, informative panels tell more about architect Cadafalch and his work and, if you then ride an elevator to the roof terrace, you will see the towers up close and be able to scale them at your own pace. The largest tower comprises three levels and opens a privileged view over the city.