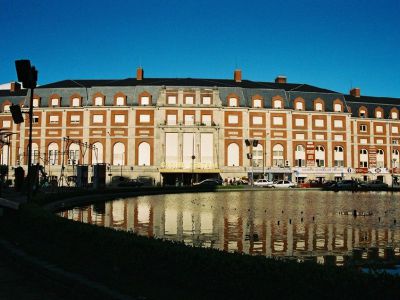 Bustillo's twin buildings were designed in an eclectic style, but with reminiscences of French Neoclassical architecture. The buildings were clad in brick and quartzite, and topped with a slate mansard. The grand entrance of the Central Casino, marked by a canopy, was located on Patricio Peralta Ramos Avenue, but was moved to the seashore esplanade following its 2007 refurbishment. Gaming space includes a main room overlooking the Atlantic Ocean, as well as rooms for high rollers (140 tables, including blackjack, baccarat, craps, and roulette) and for slot machines (630). The casino welcomes around 12,000 players per evening during the summer tourist season, with as many as 18,000 daily during January weekends.
Image by Planmdq on Wikimedia under Creative Commons License.
Sight description based on wikipedia