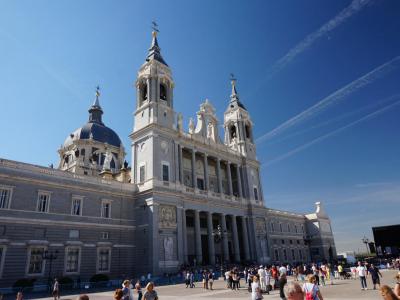 Opposite the Royal Palace, you will find the Catedral de la Almudena, a Baroque-style cathedral which was completed only in 1993.

This lovely church was designed by Marquis Francisco de Cubas. Construction began in 1879 on the site of a medieval mosque. The original plans gave the church a Gothic Revival style with a Neo-Classical cupola. An unusual thing about this building is its orientation – North-South, instead of the traditional East-West.

The construction limped along for over 50 years and was abandoned entirely during the Spanish Civil War of 1936-1939. The works resumed in 1950 under the direction of Fernando Chueca Goitia who adapted the original plans and gave the church its present Baroque look.

The interior of the cathedral is modern Neo-Gothic, with many small chapels and statues of contemporary artists in diverse styles. The crypt is Neo-Romanesque with a 16th-century image of the Virgin de la Almudena. In 2004, new paintings by Kiko Arguello were hung in the apse.

The cathedral was finally completed in 1993 and was consecrated by Pope Jean Paul II, the statue of whom is placed in front of the building.

Why You Should Visit:
Another gargantuan cathedral, conveniently located across from the Royal Palace for some time-effective sightseeing.
The museum section is a must for anyone interested in the history of the Catholic Church in Madrid.

Tip:
Don’t miss the bronze doors by Sanguino which bear the legend of the discovery of the image of the Virgin in the 15th century.
After viewing the beautiful altarpieces and magnificent vestments, plus manuscripts of the clergy in the (paid admission) museum, you can ascend to the dome for a 360º view of the city, plus to see at close proximity the oversized statues of saints perched on top.