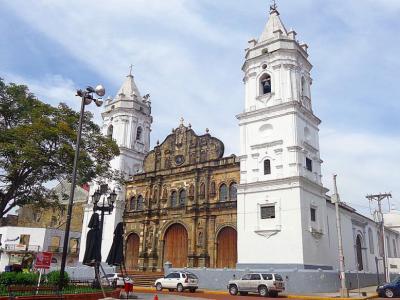 The Catedral Metropolitana Casco Antiguo which is otherwise called The Catedral Metropolitana, is located at Plaza de la Independencia in the historic district of Casco Viejo in Panama City. The cathedral is one of the largest in Central America, and was designed by military engineers and completed in 1796. No trip to Casco Viejo is complete without visiting this beautiful and historic edifice. In the late 19th century there was an earthquake which destroyed all of the surrounding structures but the cathedral remarkably survived. Surprisingly, but it had stayed deserted until a major renovation was undertaken in 2003.

The cathedral stands out for its contrast in color combination and for the mix of architectural styles which gives a glimpse of the fascinating history of the country. The stones used for the construction of the entrance wall were taken from the ruins of the city of Viejo. The walls are grey in color, and there are two tower-like structures on both sides of the entrance, which are white. These towers are layered with material called “mother of pearl”, brought from Pearl Islands, and create the look which contrasts the stone walled entrance. You will find the Catedral Metropolitana a spectacular sight at night when the whole structure is lit up. A wonderful place to visit, it will leave you with nostalgic memories long after you return home.
Image by ElvenStar on Wikimedia under Creative Commons License.