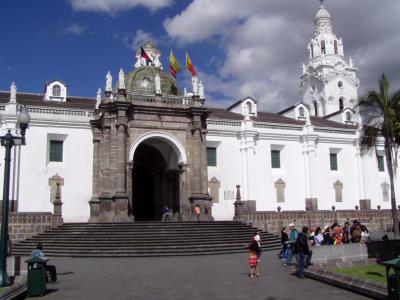 Tip:
For a quick fun adventure, get the ticket which includes the domes ($6) and enjoy some seriously claustrophobic short passages up to the roof providing great views across town.
Also, a few really well-priced craft stores in the cathedral are selling alpaca scarves and clothes – you'll regret not buying whilst there as you'll never see better prices.
Image by putneymark on Wikimedia under Creative Commons License.
Sight description based on wikipedia

This sight is featured in a self-guided walking tour of Quito, Ecuador within the mobile app "GPSmyCity: Walks in 1K+ Cities" which can be downloaded from iTunes App Store or Google Play. Please download the app to your mobile phone or tablet for travel directions for visiting this sight. The app turns your mobile device to a personal tour guide and it works offline, so no data plan is needed when traveling abroad.