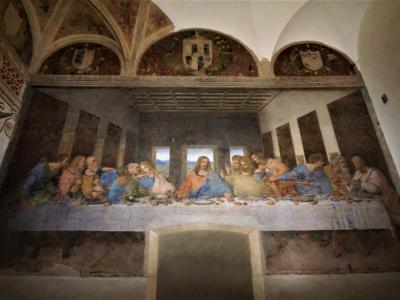 Santa Maria delle Grazie is an attractive Renaissance church and convent. The convent was completed in 1469 and the church was completed after 21 years in 1490. The dining hall of the convent contains Leonardo da Vinci's fresco, "The Last Supper". Created by Leonardo for his patron Duke Ludovico Sforza and his duchess, this 15th-century wall painting was made on drywall rather than on wet plaster. Therefore, it is not a true fresco. A fresco cannot be altered as the artist works; thus, Leonardo decided to paint on the stone wall and then seal the wall with a sealing layer. His work began to deteriorate a few years after he finished it. Two early copies of "The Last Supper", thought to be the work of Leonardo's assistant, still exist.

During World War II, the church and the convent were demolished by the bombings of the British and American planes. On the sad night of 15 August 1943, nothing was left of the church except some walls including the one that had the fresco "The Last Supper" which had been protected by lining sandbags against it.

Since it is very complicated to restore a fresco, it is kept under a weather-controlled environment. In order to view the fresco, visitors have to do an advance booking of 60 days. They are allowed to stay only for 15 minutes but that is enough to appreciate the unique work of art.

Tip:
Take time to learn and understand the online booking process! Look at their page to see the notice about when tickets will be released for a certain timeframe of visits (e.g. tickets for August are released at 9am Italy time on X date). Then you can calculate EXACTLY when you must get online to purchase the ticket.