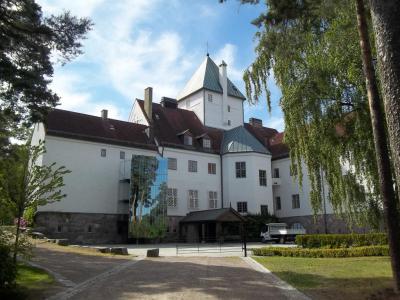 Center for Studies of Holocaust and Religious Minorities, Oslo

The Center for Studies of Holocaust and Religious Minorities is located on Bygdøy Peninsula in a building known as Villa Grande. Built in 1914, it was the residence of Vidkun Quisling during World War 2. Quisling was an extreme right wing politician who staged a Nazi-backed coup in occupied Norway. He assisted Nazi Germany in planning for the Holocaust, and was put on trial for war crimes in 1945. Convicted of treason and murder, he was executed in 1945 at Akershus Fortress.

The center now located in Quisling’s former home was created by the Norwegian government, as part of restitution to Norwegian Jews. Its primary purpose is to educate the public on the horrors of the Holocaust from a Norwegian perspective. There are also exhibitions focusing on the broader issues of antisemitism and racism. The center also serves as a museum for the life and culture of ethnic and religious minorities in Norway.

The center houses a library and research facilities, and also hosts debates relevant to the issues of ethnic culture and diversity.