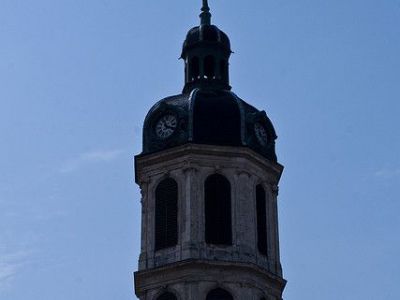 A lot of buildings are often described as “a pearl” or “a gem”. In most cases this description is exaggerated but in the case of the Chapelle de la Trinité it is not. This chapel is quite simply beautiful.

It was built in the heart of the Grand Collège in 1622 by the architect Martellange in the Baroque style. The school belonged to the Jesuit priests since 1567 and the chapel was destined for the students.

With this in mind the decoration was dedicated to education, both academic and spiritual. Sheathed in Carrare marble, it is decorated with statues and trompe-l’oeil frescoes. Since the chapel’s founding, student have been engraving signatures and small designs on top of the balustrade and you will see the names of many of the illustrious sons of the city, including Leymarie and Flacheron.

The plan of the chapel is quite simple with a central nave without projecting transept and ten side chapels, which are linked together. A small entrance behind the main altar in the semi-circular apse opens onto a vaulted corridor that leads to the choir.

Although it was classified as a historical monument in 1939, it was nonetheless abandoned and stripped of its furniture. For many years it was used as a gym and for demonstrations. In the nineteen nineties a renovation plan was launched, led by Mortamet and Repellin. The chapel reopened to the public in 2008 and is now used for concerts of Baroque music and other events.
Image by Frédéric de Villamil on Flickr under Creative Commons License.
Sight description based on wikipedia