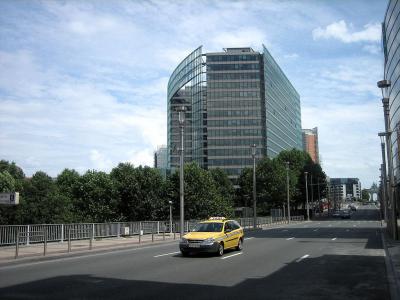 The building was designed by Jacques Cuisinier and constructed in 1967 at the same time as the Berlaymont Building to group together more scattered departments of the European Commission. However, with the Commission refusing to share the Berlaymont with the Council of the European Union, Charlemagne was given to the Council's secretariat in 1971.

The Council moved out to the Justus Lipsius building in 1995 allowing it to be renovated. The renovation was completed in 1998 by Helmut Jahn, replacing the largely concrete exterior with a glass one. After the restoration it was occupied by the Commission, further grouping the Union's offices around the Schuman roundabout.
Image Courtesy of Wikimedia and JLogan.
Sight description based on Wikipedia.