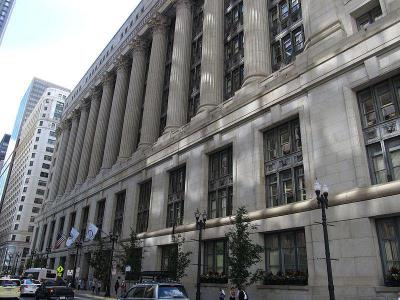 Chicago City Hall is the official seat of government of the City of Chicago in Illinois. Situated on a city block bounded by Randolph, LaSalle, Washington, and Clark streets, the 11-story structure was designed by the architectural firm Holabird & Roche in the classical revival style. The building was officially dedicated on February 27, 1911. Chicago City Hall's entrance features four relief panels sculpted in granite by John Flanagan. Each of the panels represents one of four principal concerns of city government: playgrounds, schools, parks, and water supply.

As visitors enter the building, they are greeted with elaborate marble stairways and bronze tablets honoring the past city halls of Chicago from 1837 to the present. In 2001, the roof gardens were completed serving as a test for the impact green roofs would have on the heat island effect in urban areas, rainwater runoff, and the effectiveness of differing types of green roofs and plant species for Chicago's climate.