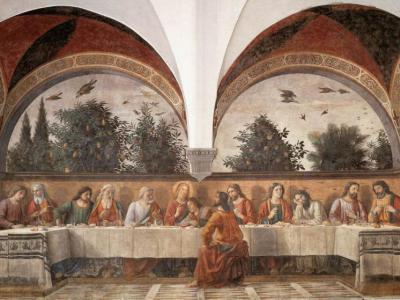 The Chiesa di Ognissanti was among the first few Baroque structures to penetrate into the predominant Renaissance style of architecture in Florence. The Ognissanti church was founded by the Order of the Umiliati that was devoted to paying homage to all saints, known or unknown. Although built during the mid-thirteenth century, the church underwent a complete makeover in the seventeenth century when it was taken over by the Franciscan Order. The shift of authority brought in a wave of new design and structure to the church. Between years 1620 and 1630, the Ognissanti Church was completely rebuilt in the Baroque style by architect Bartolommeo Pettirossi, making it one of the first Franciscan Baroque church.

The Chiesa di Ognissanti is an excellent specimen of the upcoming Baroque style in designing buildings in the seventeenth century. The façade of the church was designed by Matteo Nigetti, one of the most cherished Baroque architects. The interiors of the church are equally stunning, with the ornate Baroque detailing, the wooden crucifix by Veit Stross, the hidden symbolism of the church and the elaborate frescoes that don the wall, one of which is Dominico Ghirlandaio’s “Last Supper” a fresco that has garnered a lot of attention and admiration.
Image by Mgelormino on Wikimedia under Creative Commons License.
Sight description based on wikipedia