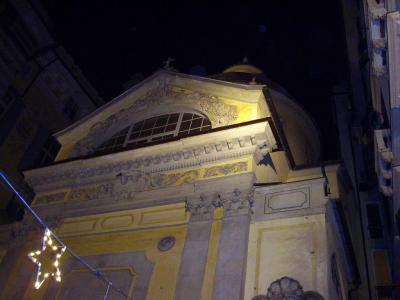 The church of St. Luke is a religious building in the historic center of Genoa, located in Via San Luca. The parish community is part of the West Central Vicariate of the Archdiocese of Genoa. Founded in 1188 by Oberto Spinola, the church has other important works: the marble statue with the 'Immaculate' altar and the "Deposition of Christ" in wood (painted by Piola), both by Filippo Parodi (late 17th century), the 15th-century reliquary tabernacle in the apse at the back, accessible from the corridor of the sacristy, but especially the "Nativity" absolute masterpiece of Giovanni Benedetto Castiglione, called Grechetto (1645).
Image by Alessio Sbarbaro on Wikimedia under Creative Commons License.

Want to visit this sight? Check out these Self-Guided Walking Tours in Genoa. Alternatively, you can download the mobile app "GPSmyCity: Walks in 1K+ Cities" from iTunes App Store or Google Play. The app turns your mobile device to a personal tour guide and it works offline, so no data plan is needed when traveling abroad.