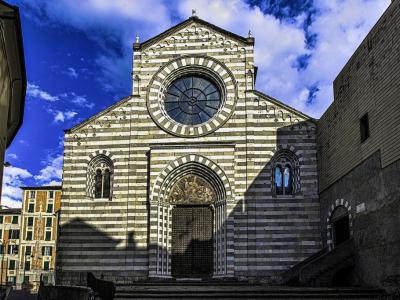 Sant'Agostino is a church in the historical center of Genoa, northern Italy. It is today deconsecrated, sometimes used for representations of nearby Teatro della Tosse. Begun by the Augustinians in 1260, it is one of the few Gothic buildings remaining in the city, after numerous demolitions in the 19th century. It has a typical façade with bichrome stripes in white marble and blue stone, with a large rose window in the middle. Notable is the ogival portal with, in the lunette, a fresco depicting St. Augustine by Giovanni Battista Merano. At the sides are two double-mullioned windows. The interior has a nave and two aisles divided by ogival arches supported by robust columns with cubic capitals. The church has also two cloister now included into a museum.
Image by Davide Papalini on Wikimedia under Creative Commons License.
Sight description based on wikipedia

Want to visit this sight? Check out these Self-Guided Walking Tours in Genoa. Alternatively, you can download the mobile app "GPSmyCity: Walks in 1K+ Cities" from iTunes App Store or Google Play. The app turns your mobile device to a personal tour guide and it works offline, so no data plan is needed when traveling abroad.