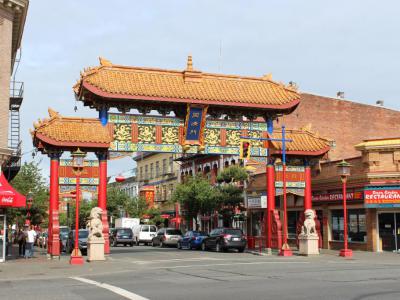 This Chinatown is the oldest in Canada and second in age only to San Francisco's in North America, with its beginnings in the mass influx of miners from California to what is now British Columbia in 1858. Its history goes back to the mid-19th century. It remains an active place for Chinese-Canadians, Victoria residents and tourists. Victoria's Chinatown is now surrounded by cultural, entertainment venues as well as being a venue itself. Chinatown is now conveniently just minutes away from other sites of interests such as the Save On Foods Memorial Centre, Bay Centre, Empress Hotel, Market Square, Victoria, and others.

The modern Chinatown continues to be a key component of Downtown Victoria with many tourist attractions, hotels, bars, restaurants, theatres, services, and shopping areas nearby.

Some of the tourist attractions of Chinatown are Fan Tan Alley (originally a private walkway, now home to offices and retail shops), and its ornate gate, The Gate of Harmonious Interest, which was built in Suzhou, one of Victoria's sister cities.

Why You Should Visit:
The atmosphere is a Chinatown but most shops in alleys are boutiques that are predominantly individualistic and carry items such as cork vegan purses that you won’t find many places. Other shops range from produce, metaphysical, Saltspring Soap, to chocolate and bakeries. The alleys are cute with a lot of atmosphere, exposed brick, clean and colorful.

Tip:
Not all restaurants are great, so make sure you read some reviews before choosing where to eat.
Image Courtesy of Wikimedia and Wknight94.
Sight description based on Wikipedia.