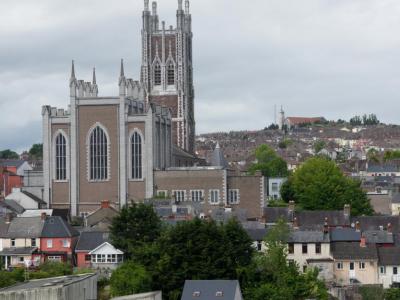 Standing discretely from the Bishop Lucey Part is the Christ Church, also known as the Holy Trinity. Offering its viewers an insight into the history of the Cork, the Christ Church also proves intriguing for those with an architectural fascination.

Built in the early eighteenth century, the present Christ Church stands on the historical site where two churches that dated back to the medieval times once stood. The neoclassical Georgian style of design is thanks to the architecture of John Coltsman, who is also known for designing the oldest surviving three centered arches in Ireland- the South Gate Bridge and the North Gate Bridge. It took about eight years for Coltsman to build the Christ Church.

The site on which the Church presently stands is one of great historical importance. The original building that stood in place of the present Christ Church was said to date back to 1050. Not only was that building speculated to be Viking in origin (Hiberno- Norse), historians also claim that it could have been the first church to be built in the city.

After serving as a place of worship, the Church ceased functioning in 1978. Subsequently the Christ Church has served as a house to safeguard Cork’s archival heritage and more recently is being turned into the cultural and artistic hub of the city.
Image by Katie Farragher15 on Flickr under Creative Commons License.

Walking Down the Eastern Part of Cork Tour

The Eastern Part of Cork City is characterized by a mixture of old and new. Cork is the city that aims to evolve continuously while retaining its traditions. The upper side of of the city is a quiet sleeping area that wakes up only around the St. Patrick's Day. Walking down south you will notice the picture change to a more contemporary look. The suggested tour is to help you explore the East...  view more