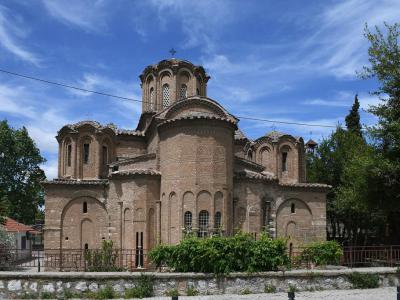 Church of Aghioi Apostoloi (the Holy Apostles), Thessaloniki (must see)

The Church of the Holy Apostles is a 14th-century Byzantine church.

As evidenced by remnants of a column to the south of the church and a cistern to its northwest, it originally formed part of a larger complex. Consequently it appears that the church was originally built as the katholikon of a monastery.

A depiction of the hegumenos Paul kneeling before the Virgin Mary, as well as a series of Marian scenes lead to the conclusion that the church was dedicated to the Virgin, perhaps to be identified with the Monastery of Theotokos Gorgoepikoos.

The building belongs to the type of the composite, five-domed cross-in-square churches, with four supporting columns. The exterior walls feature rich decoration with a variety of brick-work patterns.

The interior decoration consists of rich mosaics on the upper levels, inspired by Constantinopolitan models. Frescoes complete the decoration on the lower levels of the main church, but also on the narthex and one of the chapels.

As was their usual practice, the Ottomans covered the mosaics and frescoes with plaster, after they removed the gold tesserae. The church's modern name, "Holy Apostles", was not attributed to the building until the 19th century.
Image by Jojojoe on Wikimedia under Creative Commons License.
Sight description based on wikipedia