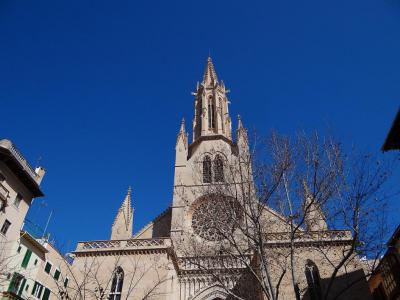 Later, the church underwent some changes to include the rosace and the carving of Saint Eulalia above the entrance, the work of Guillem Ferrer. In 1893, Joan Sureda i Veri restored the facade of the church giving it a more modern look.
Image by Chixoy on Wikimedia under Creative Commons License.

A visit to Palma de Mallorca cannot be complete without exploring its main religious sights. Palma is full of fabulous churches and parishes that are truly worth seeing. This self-guided walking tour will take you to the most prominent places of worship, that should definitely not be missed when in Palma.