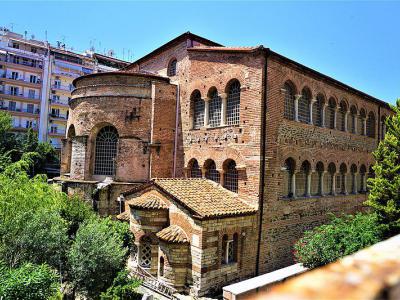 Church of the Acheiropoietos, Thessaloniki (must see)

The Church of the Acheiropoietos is a 5th-century Byzantine church. It is another part of the Palaeochristian and Byzantine UNESCO World Heritage Site. The Acheiropoietos has been dated from its bricks and mosaics to AD 450–470, making it perhaps the oldest of the city's surviving churches. It is dedicated to the Virgin Mary. Its current name is first attested in 1320, presumably after a miraculous acheiropoietos ("not made by hands") icon of Panagia Hodegetria that was housed there. The building is a three-aisled basilica, with a wooden roof. The surviving parts of the church's rich original interior decor include the particularly fine 5th-century Ionian capitals from a Constantinopolitan workshop, the green Thessalian marble columns of the tribelon, the original Proconnesian marble pavement of the central nave, and fragments of the 5th-century decorative mosaics.
Image by Joyofmuseums on Wikimedia under Creative Commons License.
Sight description based on wikipedia